Home » As ACORN Fades, Its Successor’s Political Clout May Grow

Now that ACORN is shuttering its headquarters and splintering into dozens of different grassroots groups, its leaders across the country and in New York are doubling down on the very thing that has antagonized its conservative critics.“Organizing, organizing, organizing,” said former ACORN CEO Bertha Lewis, standing on the steps of City Hall on a rainy Monday in March.

Lewis had just celebrated, along with a half-dozen local lawmakers and citywide officials, an appellate court ruling which found Congress’s decision last year to strip ACORN of its funding unconstitutional.

The ruling itself was a pyrrhic victory. 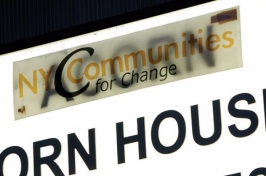 Lewis had already instructed ACORN’s successor organizations to disentangle themselves from local governments, to diversify their funding sources, and to distill their core missions. ACORN affiliates will no longer provide foreclosure counseling or help low-income workers apply for the Earned Income Tax Credit, two programs that were funded in part by taxpayer dollars.

The outlines of ACORN are still visible in the New York Communities for Change, at the group’s 2 Nevins Street offices, and in many of its relaunched operations.“We’re not going to be a service group,” said Jon Kest, the former head of the New York chapter of ACORN and now the leader of New York Communities for Change, a local successor organization run by many of the same people. “The key piece for us is going to be community organizing.”

Refusing government funding and shedding their social-services components will also allow New York Communities for Change and other ACORN successors to more easily engage in electoral politics without opening themselves up to charges of using taxpayer dollars for partisan purposes.

Lewis acknowledged that the receipt of government funding was what made ACORN a ripe target for its enemies.

“This is a weapon that folks have used,” Lewis said. “And so, for us, our advice to other community groups is, ‘diversify

your funding base, and don’t even give these people a chance.’” Without the restrictions tied to government funding, according to Lewis and others, ACORN’s successor organizations will likely be even more politically aggressive than ACORN was. Already, supporters and board members of New York Communities for Change have begun to discuss whether the organization should join the Working Families Organization, an association of labour unions and community organizing outfits tied to the Working Families Party, a significant force in local elections. Lewis was a co-chair of the Working Families Party and co-founder of the Organization, and ACORN was among the largest and most influential members.

“They were such an integral part of the organization and everything we did,” said Dorothy Siegel, the treasurer of both the WFP and the WFO. “If we needed troops on the ground, there were two ways to get them: through ACORN and through an affiliate.”

Siegel held one of the first fund-raisers for New York Communities for Change in her home in Brooklyn Heights in late February. The event attracted several elected officials, including de Blasio, and raised several thousand dollars.

Though WFP co-chair Bob Master and executive committee member Peter Colavito were on the host committee for the event, neither they nor other officials from the WFP attended, according to Siegel, and ACORN leaders were absent from a meeting of the WFP executive committee in Albany in March. But Siegel said there has already been preliminary discussion among WFP members about whether New York Communities for Change should join the coalition.

“I think they want to participate,” Siegel said of the new organization’s leaders. “These are people who are very, very involved in the work of the WFP.”

Kest said that there was considerable support among the organization’s board members for working with the WFP coalition and that the matter would be discussed further as New York Communities for Change rebuilds.

“There’s a lot of sentiment that part of what worked well with ACORN was being involved with the WFP, as well as doing the organizing work,” Kest said. He cautioned, though, that New York Communities for Change could not simply inherit ACORN’s role in Working Families, because there is no formal link between the old group and the new one that would allow ACORN’s paid membership in the WFO to be transferred to New York Communities for Change.

Working Families spokesperson Dan Levitan said the group would have to decide on its own whether to join.

“As a community organization doing the work that Communities for Change are setting out to do, joining Working Families might be a good fit,” Levitan said. “But of course, it’s up to them.”

As for ACORN, Lewis and her colleagues have begun to formally dismantle the national organization. Most former ACORN officials, especially those who have started new organizations, consider ACORN, for all intents and purposes, dead.

But in the weeks before the bankruptcy proceedings, Lewis said she held out hope that it would one day be possible to revive ACORN—after its well-publicized troubles have faded from public memory.

“We’re hoping that our presence can be reconstituted,” Lewis said. “Other folks, they’ve decided, ‘We’ve got to move forward. We’re not ACORN, because we need to be independent.’”